Legend of Tulukku Nachiar or Bibi Nanchari - Muslim consort of Hindu God
1.At the Ranganathaswamy temple in Srirangam, a small sannidhi stands in the corridor bordering the sanctum sanctorum.it houses the sannidhi of Thulukka Nachiyar. She was the Muslim princess who became the divine consort of Lord Ranganatha. In Srirangam temple, the presiding deity, Ranganatha, a form of Vishnu, receives a daily offering of rotis, sweet with a heady scent of ghee – made with wheat (in contrast to the orthodox rice meal) and even wears colored lungis (not the white cloth worn by Hindus) to please a Muslim princess. This shows how beloved the Thulukka Nachiyar or Bibi Nachiyar is to Ranga A small painting of the princess hangs in the temple complex.
2.At Tirumala,Bibi nancharamma,Muslim devotee, has given status of Lord's wife,even Bronze statue is present inside the temple of Tirumala.
3.Legend of Tulukku Nachiar:
When Malik Kafur invaded South India,(during 1310-1311), news reached the temple authorities in Srirangam that Kafur was planning to plunder the temple. Srirangam was captured and the riches were looted.
The invaders did not want to accept the rituals of Hinduism. They took off the statue of Alagiyamanavalar Perumal and plundered the treasures, jewels and ornaments which belonged to Srirangam temple. The statue of Alagiyamanavalar Perumal was sent to Delhi.Most of the plundered and looted golden idols were melted and added to the treasury of the Sultan.
The princess of Delhi, the daughter of Sultan, was much attracted by the beauty of Azhagiya Manavalan that she begged her father, the Sultan, not to melt Him and give it to her for playing with as a toy. He gifted the golden idol of Azhagiya Manavalan, to her, to play with. She became quite attached to it!. She was so much magnetized by the beauty of Azhagiya Manavalan, that she became inseparable from Him and fell in love with Perumal. She never left Perumal even a moment. The Sultan didn't expect this. 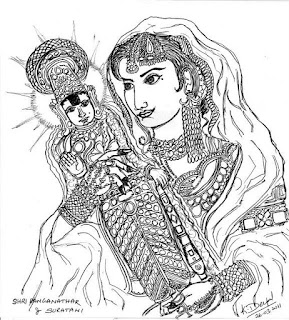 When Ramanujar, the Vaishnavite saint, went to retrieve the idol and the princess wouldn't part with it. The Sultan however, happily, surrendered the statue of Alagiyamanavalar Perumal back to Guru Ramanujar. The Daughter of Sultan could not bear this. Ultimately she followed it back to Srirangam. At Srirangam the princess became Ranaganatha's consort. She is worshipped as Thulukka Nachiyar. Now there is a separate temple for Her near Ranganathar temple next to Arjuna Mantapam,near the sanctum sanctorum.Every year Kalyana uthsavam with Arangan is celebrated in a grand manner, when Butter Rotis and Sugar, cooked Mughalai style are first offered to the Naachiyaar and then only offered to Rangan.
4.Legend of Bibi Nancharamma:
The legend has it that Lord Balaji married a Muslim woman Bibi Nancharamma, who was the daughter of a Muslim general, in 1311 AD, after he was immensely pleased by her devotion. Her idol has a pride of place in Tirumala temple precincts," the priest said. It is not unusual in Tirumala to allow backward castes and Dalits to certain rituals. In fact, every morning rituals such as opening the door, offering food to God (modati darsanam, naivedyam) are performed by them. In addition, even classical poets like Annamayya or any other Vaishnava respect Bibi Nancharamma, a Muslim woman as the consort of the deity.
Some people believe that though she was not his actual wife, she was a great devotee to the lord and reached him through her worship. (Similar to Meerabai and Sri Krishna).Every year many Muslims from the Rayalaseema region offer respects to her and visit Lord Venkateshwara's temple after visiting the Dargah in Kadapa. 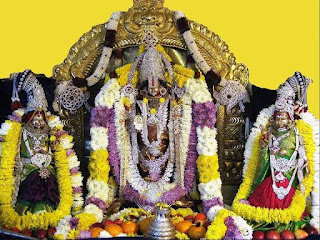 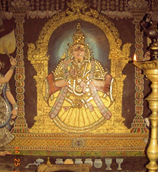 5.There are no proper historical evidence or proper records are present for these incidents.But Both these ladies get same respect and devotion as Lord himself.There are many arguments like both these ladies are same,both are different...But Irrespective of it being just a myth or truth, the essence is known.
Posted by Unknown at 10:34 AM