FALL OF KAKATIYA DYNASTY - STORY OF A WARRIOR KING WHO REFUSED TO GIVE UP HIS SELF RESPECT TILL HIS VERY LAST BREATH
1. The Kakatiya dynasty(1175 - 1324) was a South Indian dynasty whose capital was Orugallu, now known as Warangal. The Kakatiya reign is said to be the brightest period of the Telugu land with the Kakatiya rulers extending the empire beyond Warangal all th way upto Raichur, Karnataka. The stalwarts of the Kakatiyan Dynasty united all the Telugu kings under one administration and are the most brilliant monarchs ever to rule the Andhra region right up there with the Satavahanas. 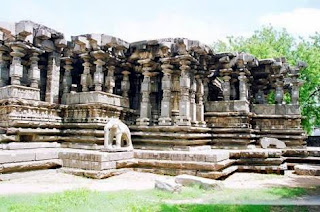 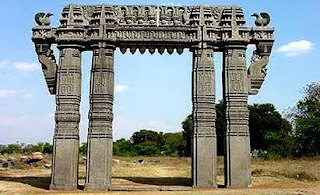 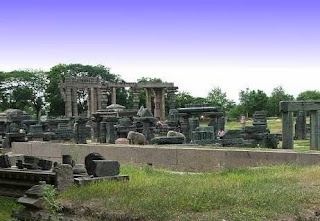 2. Prataparudra(the last emperor of Kakatiya dynasty), the son of Rudramadevi's(great warrior queen) daughter Mummadamba, ascended the throne following his grandmother's death.During his reign,Kakatiya dynasty reached its zenith. The Kakatiyas were thus able to emerge victorious over their neighbors in the 1290s, and assert themselves as one of the major powers of peninsular India. However, the Kakatiyas would seen encounter a new enemy unlike anything they had faced previously.
3.In 1295, a Turkish army under Alauddin Khalji crossed the Vindhya mountains in a daring expedition, and seized the Yadava capital of Devagiri. This marked the first time in history that a Muslim army was able to penetrate deep into the Deccan, and it was a sign of more things to come. The Kakatiya kingdom attracted the attention of Alauddin because of it's richness and prosperity.
4. The first Turkish invasion of the Kakatiya kingdom took place in 1303. The Turkish army was commanded by Malik Fekhruddin Juna and Jhaju of Kara. The Turks chose to attack the Kakatiyas via Kalinga, advancing southwest from Bengal. However, quite unlike what happened in Maharashtra in 1295, the Turks were met and defeated by a Kakatiya army at the Battle of Upparapalli. The Kakatiya army during this engagement was commanded by the Velama generals Recherla Venna and Potuganti Maili. The Telugu chronicle Velugotivarivamsavali credits the two generals with "destroying the pride of the Turks." This Kakatiya victory is also corroborated by Ziauddin Barani, who describes the return of the defeated Turkish army to Delhi.
5. The next recorded Turkish invasion took place in 1309, when Alauddin Khalji sent a large army commanded by Malik Kafur and Khwaja Haji to Telangana. This new Turkish army attacked the Kakatiyas via Maharashtra, using Devagiri as a base of operations, and utilized Maratha soldiers provided by the Yadava king Ramachandra. The Turks reached Warangal on 19 January 1310, and promptly laid siege to the outer fort. After 25 days, Prataparudra sued for peace, sensing that he lacked the means to successfully defend the fort. He handed over his wealth to the Turks and agreed to send additional tribute in the future.
6. Meanwhile, the political disturbance caused by the Turkish invasion resulted in a fresh wave of revolts against the Kakatiyas in southern Andhra. It seems that Prataparudra, during the course of these wars in the south, practically ignored the Delhi Sultanat and his promise to send regular tribute.
7. In 1318, the new Sultan of Delhi, Qutbuddin Mubarak Shah, marched to Maharashtra to crush the rebellion of Harapaladeva, who was a vassal of the Turks. After securing Devagiri, the Sultan sent an army under Khusrau Khan to Warangal with a force that bristled with technology previously unknown in the area, including trebuchet-like machines. Prataparudra had to submit once more, with his obeisance on this occasion being arranged by the sultanate to include a very public display whereby he bowed towards Delhi from the ramparts of Orugallu. The amount of his annual tribute was changed, becoming 100 elephants and 1200 horses.
8. The next appearance of the Turks in Telangana was in 1323. Sultan Ghiyasuddin Tughlaq sent an army to Telangana under his son Ulugh Khan, the future Mohammed b. Tughlaq. According to Ferishta, writing in the 17th century, the reason for this invasion was once again Prataparudra's refusal to pay tribute. Ulugh Khan besieged Warangal for six long months, but he was unable to capture the city. The Turkish forces withdrew in defeat, with the Kakatiyas pursuing them until they had left Telangana.
9. Following their failed attempt to capture Warangal, the Turks withdrew into Maharashtra and took refuge at Devagiri. Sultan Ghiyasuddin, determined to defeat the Kakatiyas, immediately dispatched fresh troops into the Deccan. Wasting no time, Ulugh Khan( later called as Muhammad bin Tuglaq) set out for Warangal,all once again as soon as he received the reinforcements. Ten days later, Ulugh Khan was once again at the gates of Warangal.
10.The speed with which the Turks returned took the Kakatiyas completely by surprise. King Prataparudra, assuming that the Turks would not return in the near future, had committed a fatal strategic blunder; in celebration of the Kakatiya victory, he had opened the fort's food stores to the public, sold all the grain in the granaries, and dismissed his assembled troops. Thus, when the Turks returned later that year, the fortress at Warangal lacked adequate provisions and an adequate garrison. Nonetheless, the Kakatiyas still managed to hold out for an astounding five months before hunger and lack of basic supplies began wearing them down. Recognizing the futility of the situation, Prataparudra surrendered himself to Ulugh Khan, and the Turks occupied Warangal and looted. Probably at this time the world famous KOHINOOR was took away. Prataparudra was sent north to the Sultan's court in Delhi, but he committed suicideon the banks of the Narmada river. The Kakatiya dynasty thus came to an end.
Posted by Unknown at 10:22 AM