KUCHIPUDI - CLASSICAL DANCE FORM FROM INDIA
1.Kuchipudi is the classical dance form from the South-East Indian state of Andhra Pradesh. It derives its name from the village of Kuchelapuram, a small village about 65 kms from Vijaywada. It is known for its graceful movements and its strong narrative / dramatic character. 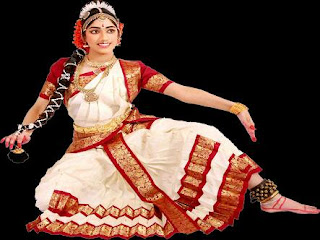 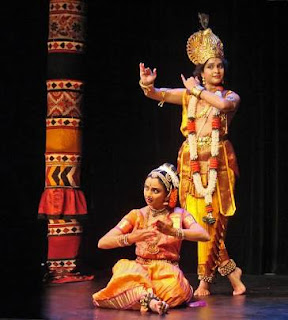 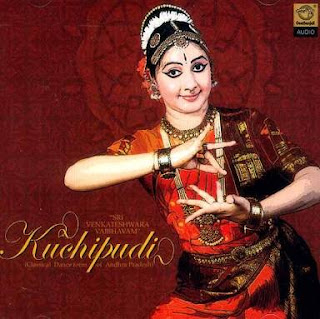 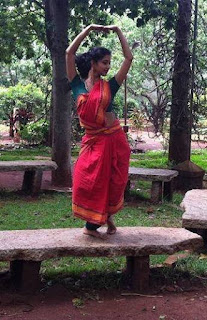 2.The performance usually begins with some stage rites, after which each of the characters comes on to the stage and introduces herself with a dharavu (a small composition of both song and dance) to introduce the identity, set the mood, of the character in the drama. The drama then begins. The dance is accompanied by song which is typically Carnatic music. The singer is accompanied by mridangam (a classical South Indian percussion instrument), violin, flute and the tambura (a drone instrument with strings which are plucked). Ornaments worn by the artists are generally made of a lightweight wood called Boorugu.
3.Carrying a fine combination of Natya, Nritta and Nritya, Kuchipudi was never a solo affair and required a number of performers. Kuchipudi was performed in the open air by performers who were given a vigorous training in abhinaya, music, dancing and singing. In its early form, the female roles were played by boys and young men of beautiful looks. The director (called Sutradhar) played the most important role.
4.Kuchipudi has many features that are common to other classical dances of India. Kuchipudi carries the sensuousness and fluidity of Odissi with the geometric line of today's Bharata Natyam. As in all other classical dance forms of India, the Kuchipudi dance is both interpretive and lyrical, making use of abstract dance sequences as well. Kuchipudi dance retains its devotional character with stress on dramatic outlook. It is because of these qualities and features Kuchipudi dance enjoys great popularity and is recognized as one of the leading classical dance styles of India.
5.Kuchipudi is as ancient as Natya sastra (1st century BC)in which mention is made of a dance drama form besides solo. An invocatory verse also indicates that four forms of dance were prevalent then, of which ‘Dakshintya’ or South Indian form is apparently the earliest version of Kuchipudi. There is also historical evidence that the art flourished during the reign of the Satavahanas (2nd century BC). Over the centuries as the performances were dedicated to the worship of Vishnu, the form came to be known as Bhagavata Mela Natakam. It was during Siddhendra Yogi’s time (14th – 15th century) that it came to be known as Kuchipudi, named after the village established by Siddhendra Yogi where his follower, the Brahmin performers settled down.
6.Two parallel schools of dance have existed since time immemorial, viz. Nattuva Mela and Natya Mela. The former evolved into Bharat Natyam and the latter into Kuchipudi. There is difference in the presentation itself. The main difference lies in the abhinaya. The graceful, lasya oriented Kuchipudi gives importance to Vakyartha abhinaya go together. Bharatanatyam on the other hand is Mudra oriented and gives importance to Padartha abhinaya, each word interpreted through mudras.
7.It is said that Siddhendra Yogi had a dream in which Lord Krishna asked him to compose a dancedrama based on the sequence of the bringing of paarijaata flower for Sathyabhaama, the most beloved queen of Krishna. In compliance with this command Siddhendra Yogi composed the Bhaamaakalaapam which is till now considered the piece-deresistance of the Kuchipudi repertoire. Siddhendra Yogi initiated young Brahmin boys of Kuchipudi village to practice and perform his compositions particularly Bhaamaakalaapam. The presentation of Bhaamaakalaapam was a stupendous success.
Posted by Unknown at 10:28 AM